We need to start off today with a quick vocabulary lesson, because while I’m a geek and a vocabular-iholic (is that a word?), not everybody is.  Sesquicentennial is just a fancy way to say the 150th anniversary of something. 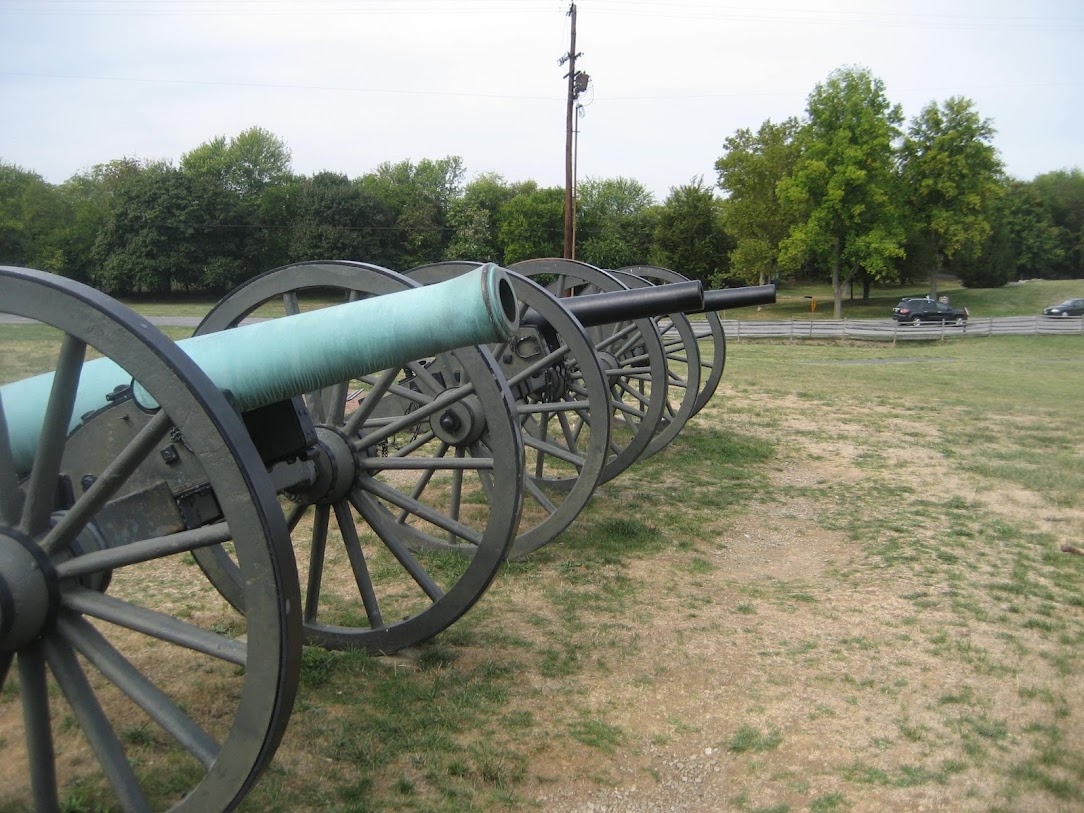 In case there are those of you out there who aren’t aware, we are in the midst of the sesquicentennial of the American Civil War.  The War Between the States.  Whatever you call it – and there are literally dozens of names for what is arguably the greatest tragedy in our nation’s history and the turning point from which all of modern history and present American society developed.  The Civil War’s 150th anniversary is being observed across our country in a variety of ways, and while the anniversary years of the war are technically from 2011 to 2015, the anniversary really began in November of 2010, which was the 150th anniversary of Abraham Lincoln’s election.  Right now, we are only about  a year and a half into observing the sesquicentennial of a war that lasted four bloody, terrible years, resulted in the deaths of over 600,000 men and caused millions more to spend the rest of their lives as invalids from wounds and diseases suffered during their service.

Regardless of which “side” you take (and I hope you readers are the sort willing to engage in an unbiased study of ALL sides), the next two and a half years are the perfect chance to learn more about the Civil War.  Honestly, everyone who is a citizen of this country should learn about the Civil War, and it sadly doesn’t seem to get much attention in school.  Understandably so – even after 150 years, it’s a touchy subject in many parts of our country.  But it’s important.  You can’t understand the Civil Rights Movement without studying the ideologies and political rhetoric leading up to the Civil War or what came from its aftermath.  Heck, the “indivisible” part of the Pledge of Allegiance, which millions of school children say every day across America, is in the Pledge because of the Civil War.

Think about that for a minute.

Now, as I’ve already said at the beginning of this post, I am a geek. Not just about words.  I’m a huge history geek.  Especially when it comes to the Civil War.  And as a writer of historical fiction, I feel it’s extremely important to be as accurate as possible in the historical details pertaining to your story.  A few months ago, I wrote about this and offered some of my favorite resources.  Even if you don’t use the actual details in your story, your knowledge of them strengthens the setting you’re building in your narrative.  Your background knowledge provides a framework for the choices your characters make and the things they do based on what’s happening in the world around them.

Today is the 150th anniversary of the Battle of Antietam, which remains the single bloodiest day in American military history.  23,000 men were dead, missing, or wounded by the end of the day, over 3500 of them killed outright during the battle.  And that, my friends, is the whole reason for this post.

Two Septembers ago, I had the opportunity to visit Antietam National Military Park.  (Side note – check out their site.  So comprehensive.  Go check out their YouTube channel as well.)  This was awesome for two reasons.  First – hello!  Civil War geek here!  But the second reason the visit was total awesomesauce was because, in my magnum opus, one of my main characters fights at Antietam.  And it’s one thing to study history books and maps and so on. It’s another to actually go to the place where this major event happened, see the layout of the land, and visualize what happened that day while you’re standing on the same ground.

It’s a really amazing experience.  Especially since most Civil War movies do a terrible job of depicting battles.  The only two Hollywood productions I can think of, off the top of my head, that actually presented worthwhile battle scenes were “Gettysburg” and the First Battle of Bull Run sequence in the “North & South: Book II” miniseries.  Why?  Because they filmed the battles with volunteer reenactment groups who knew what they were doing, and they filmed on location. And I know they filmed on location because I have been to both Gettysburg and Bull Run.

Antietam National Battlefield is kind of a special thing.  It’s nestled in the Maryland countryside, and the battlefield and surrounding area really hasn’t changed much in the 150 years since the Union and Confederate armies clashed in battle over what amounts to about 3 square miles, maybe a little more.  Sharpsburg is still a small town.  The farm fields are still in use.  It doesn’t get the huge levels of traffic larger, more well known sites like Gettysburg see every year, but in a way that helps maintain its charm.  When you walk out onto the battlefield, there’s very little to get in the way of your imagination.

I’m not going to give you a blow-by-blow history lesson about the battle.  You can read up on it anywhere – Wikipedia, the National Park Services Website, the Civil War Trust’s website, countless books.  I do want to share a handful of my favorite photos from my trip, along with a video of an artillery demonstration.  If you want to see more of my pictures, you can check out the full album here. 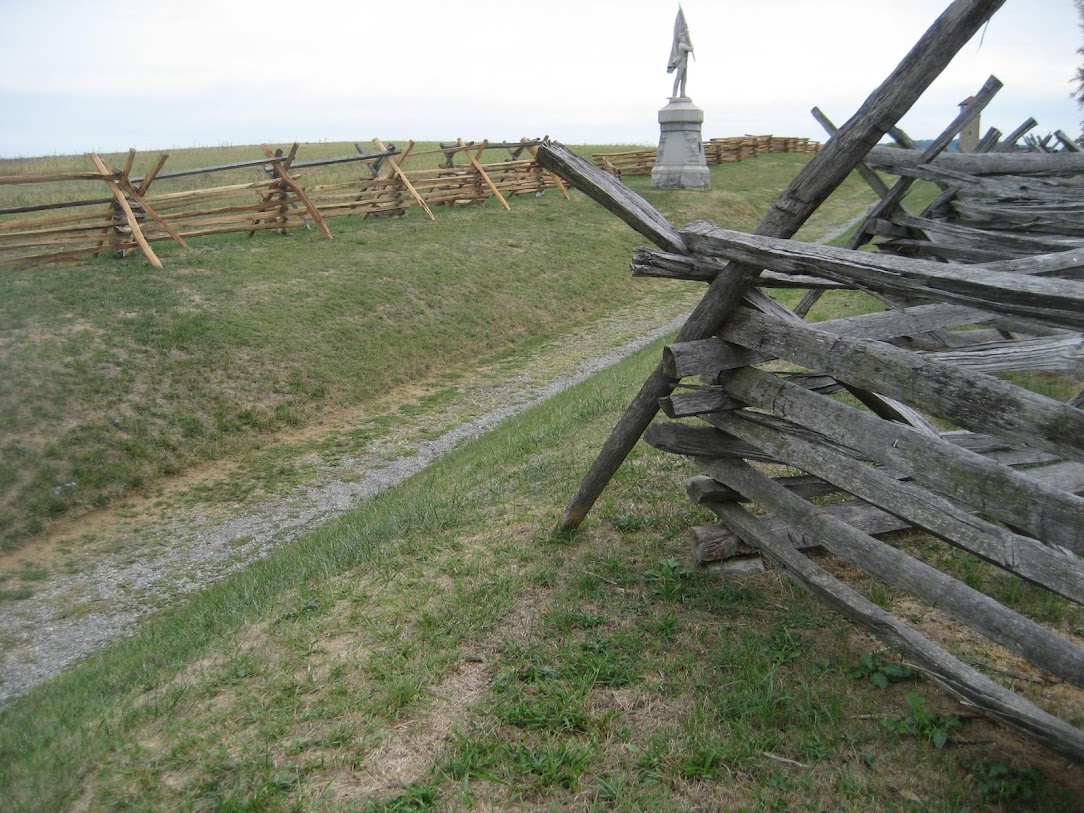 Bloody Lane. For three hours, 2,200 Confederates held this position against 10,000 Union troops. After the line fell and the Confederates retreated, the Union attackers described the dead in the sunken road as lying neatly in rows like railroad ties, and mingled like “cordwood” with the broken fence rails. 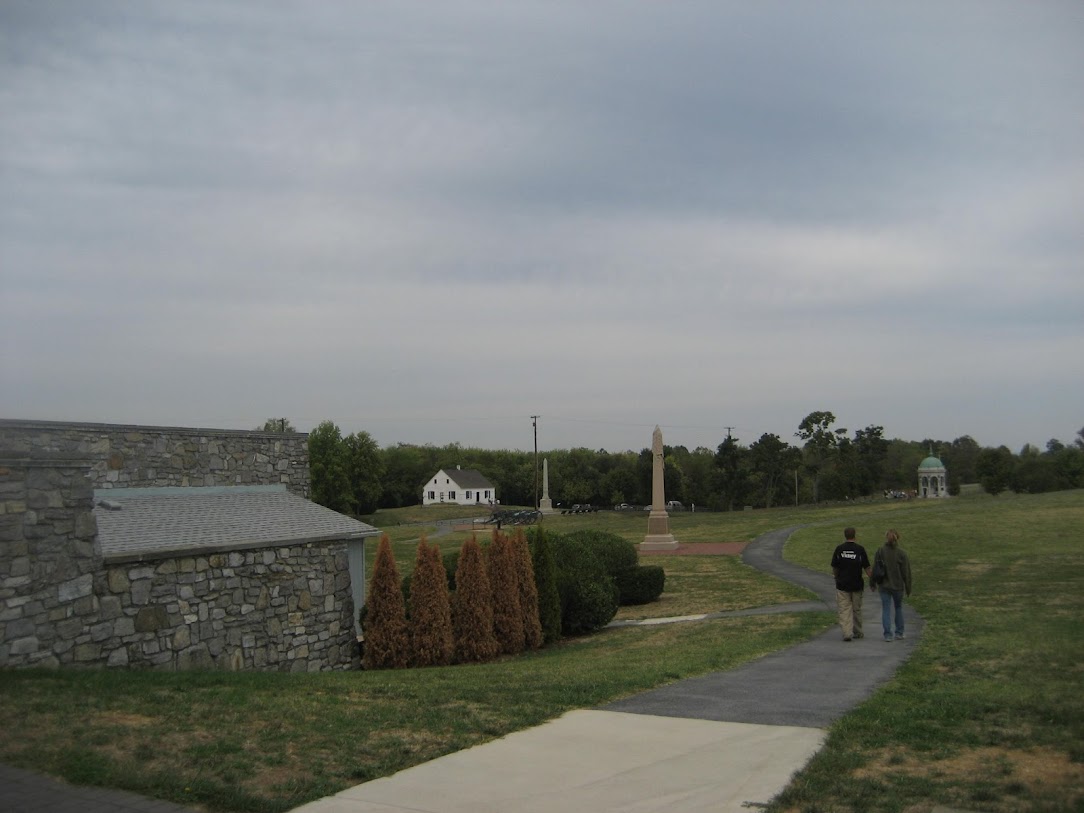 Heading out of the Visitor’s Center toward the northwest portion of the battlefield. The Dunker Church, which was used as a field hospital during the battle, is the small white building in the distance, across the Hagerstown Pike. 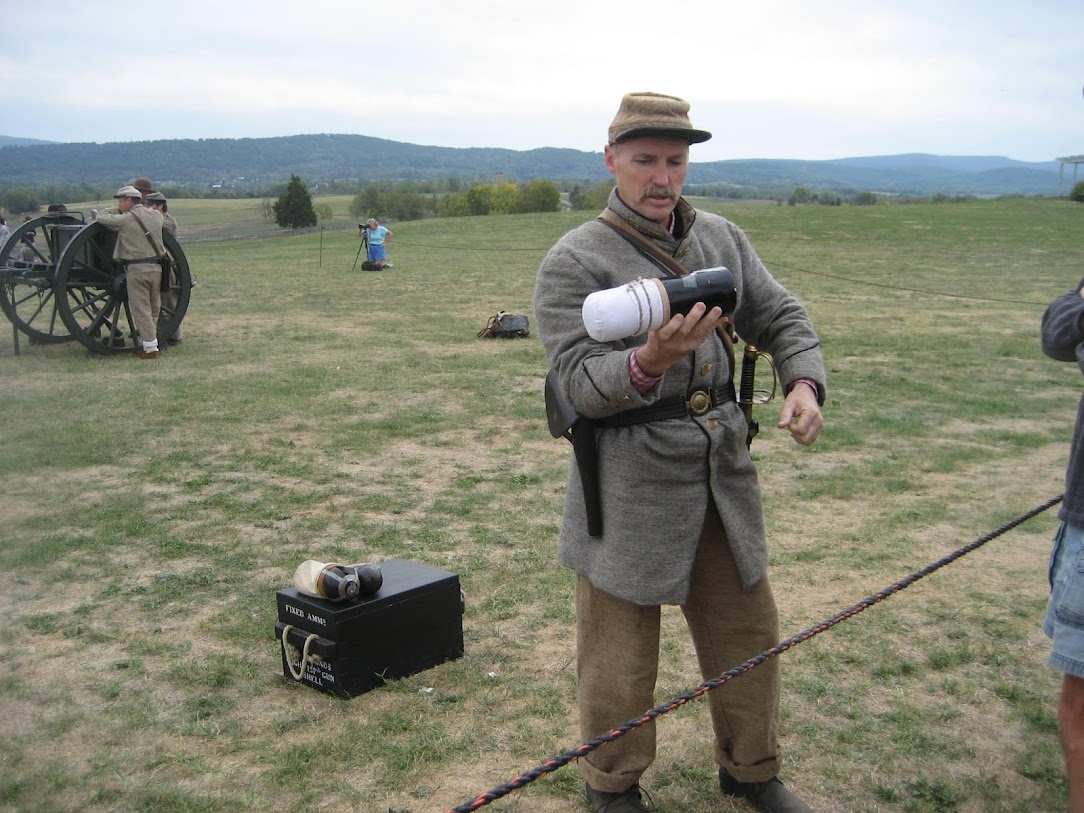 One of the reenactors answering questions about the different types of artillery shells. Here he tells about canister shot, which was used at point blank range and basically turns a cannon into a big shotgun. Canister shot was used during the last stages of Pickett’s Charge at Gettysburg, and anyone caught in canister shot pretty much disintegrated into what has been described in eyewitness accounts as a “red mist.” Makes you wonder how anybody at all made it back from that sort of charge. 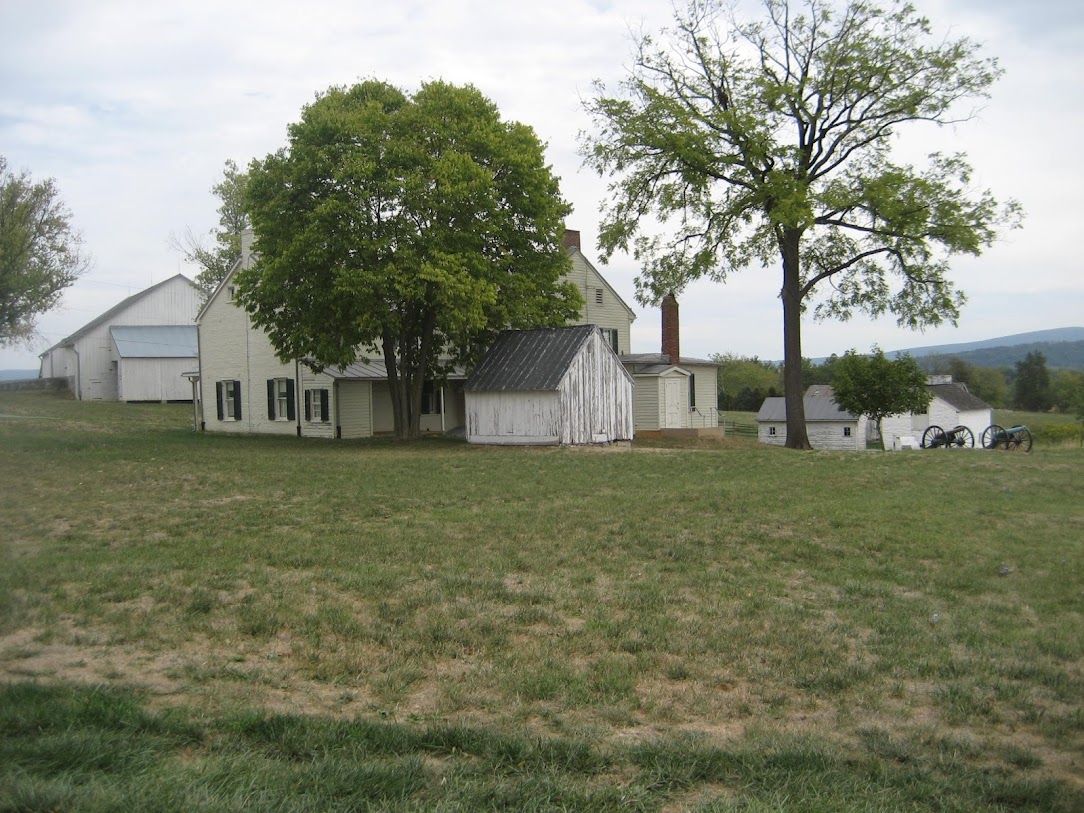 The rebuilt Mumma Farm. The original buildings were burned down before the battle by the Confederates, to keep them from being used by Union snipers. The Mumma family was never compensated for their losses, as the Union army only compensated for destruction it was responsible for. 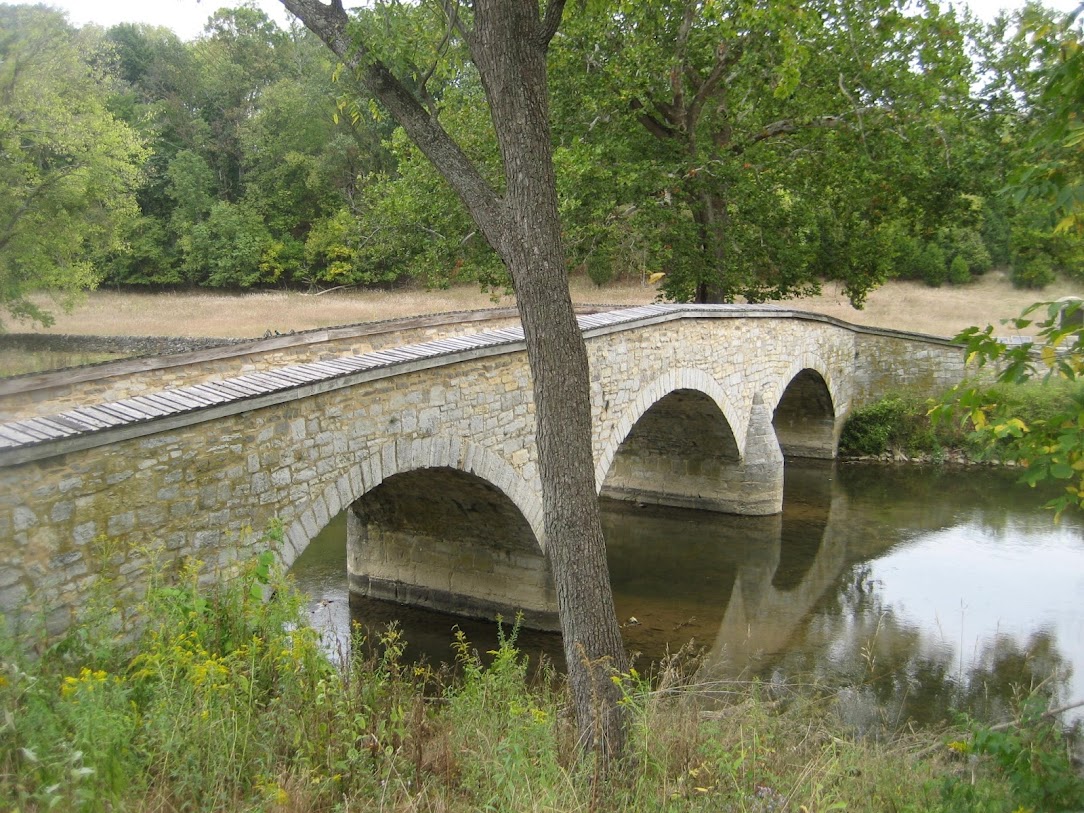 Burnside’s Bridge at the south end of the battlefield, looking down from the top of the crest where 500 Confederate soldiers kept the advancing union forces under Ambrose Burnside at bay for three hours. 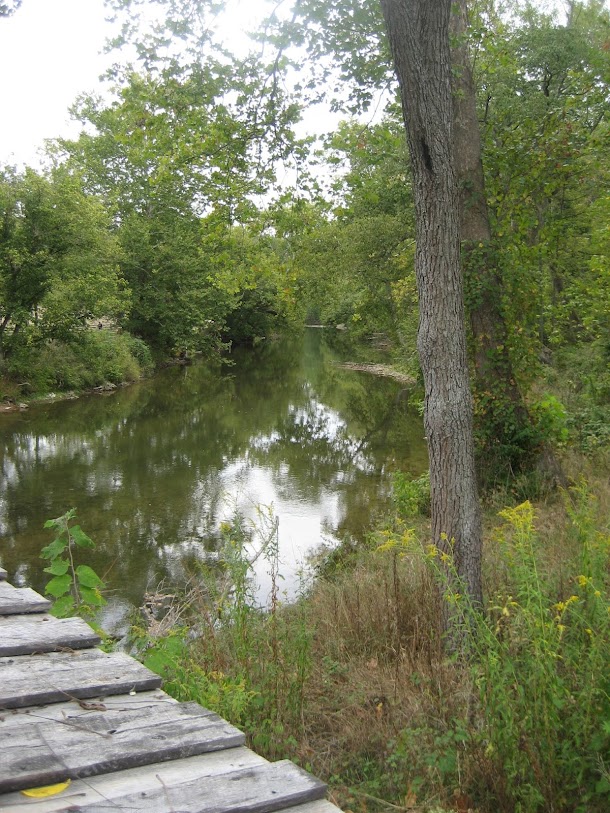 Antietam Creek, lazily drifting south as though 23,000 soldiers weren’t killed, wounded, or gone missing on these fields 150 years ago.