Gettysburg National Military Park has been enjoying a huge influx of visitors this week, as it’s the 150th anniversary of the battle. Called many things – the “high water mark of the Confederacy”, the turning point of the Civil War, the bloodiest battle ever fought on American soil – it’s worth taking the time to know the history of this important site and the events that made it famous.

It would be beyond amazing to visit Gettysburg this week, due to the numbers of reenactors who are there, portraying military units and civilians. But I saw a photograph yesterday of the crowds at Devil’s Den, participants in a walking battlefield tour, and frankly, it wouldn’t be worth it. I’m not sure you’d even be able to learn anything with the thousands of people milling about as they are. I like visiting battlefields in their off seasons, when it’s not so crowded. It helps me retain the feeling of time and place. As such, the hubs and the in-laws and I visited Gettysburg last summer, at the end of July. So I guess you could say I marked the 149th anniversary of the battle.

(Sit tight, folks, this is gonna be a long one.)

The Battle of Gettysburg

Nobody planned to fight at Gettysburg in July 1863. But General Lee lost one of his most brilliant generals, Thomas “Stonewall” Jackson, after the Battle of Chancellorsville in May, and he wanted to take the fight out of war-ravaged Virginia. If the Confederate army could threaten major Union cities like Baltimore, Harrisburg, and the capital of Washington, it could bring a swifter end to the war – and Southern victory.

Historians have speculated on this; had Lee’s second invasion of the North been successful, the war could have ended that summer. Things hadn’t been going well for the Union armies, at least in the Eastern Theater. By the end of June 1863, the Army of the Potomac was on their sixth commander in two years. Yes, Grant and Sherman were tearing it up in the West, scrabbling to gain control of the Mississippi River. In fact, by the time Lee marched the Army of Northern Virginia into Pennsylvania, Grant had already been engaged in a six-week siege of Vicksburg, Mississippi – a siege that was destined to end with the Confederates’ surrender on July 4th, giving the Union control of the Mississippi and effectively cutting the Confederacy in half for the remainder of the war.

But in the East, General Meade was the latest in a long line of generals, from McDowell to McClellan to Pope (to McClellan again) to Burnside to Hooker, who had to face off against Lee and a Confederate army so used to victory, their commander thought them almost unbeatable.

At the end of June, the Army of Northern Virginia marched through Maryland and into Pennsylvania, and the Army of the Potomac pursued them. Lee had no idea where the Union army was, however, since his cavalry, the “eyes and ears” of the army, was no where to be found. Lee’s army was, initially, split, with General Ewell’s forces coming so close to the city of Harrisburg that he “could hear the church bells” ringing in the steeples. But he would have to turn his divisions around and march back toward the little town of Gettysburg, because that’s where the armies converged.

The first day of fighting, July 1st, was not of the large-scale caliber that would ensue in the next two days. North of the town, the Confederates used an unfinished railroad cut to advance upon the town – legend has it they’d heard there were shoes in Gettysburg, hence the detour – and two brigades of Hill’s Third Corps ran smack into Buford’s cavalry on McPherson’s Ridge, starting the battle. 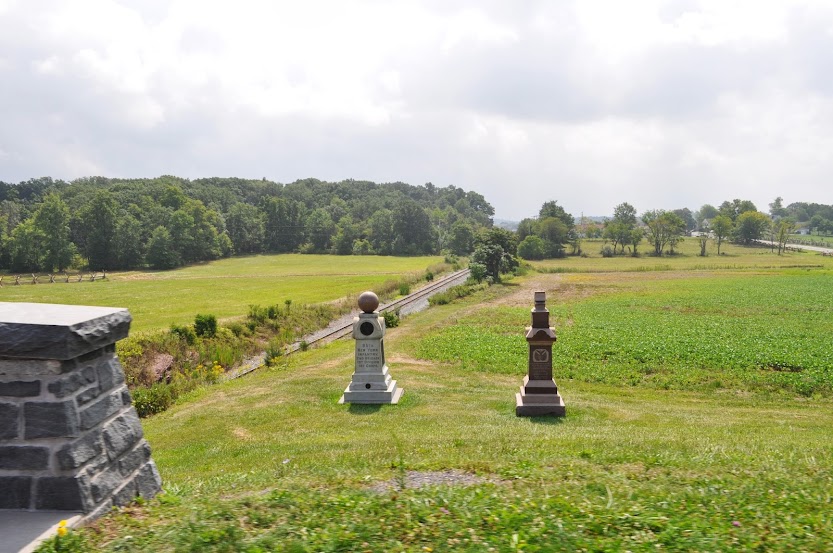 The railroad cut is finished now, of course.

Reinforcements from both armies began to stream into the area, and the battle intensified. General Reynolds was killed, and the Union troops were pushed through the town itself before taking up positions on the high ground south of town on Cemetery Ridge. Lee gave Ewell discretionary orders to attack “if practicable”, but Ewell, who didn’t have the same sort of fire in his belly as Jackson had, did not attempt to take the high ground. It’s arguable what would’ve happened if he had done so. The Union army had yet to get all of their forces into place, and had Ewell pressed his advantage, it’s possible the battle would have ended that night.

But this was not to be, and by morning on July 2nd, Meade’s forces had their defensive positions in a huge fishhook that extended from Little Round Top, along Cemetery Ridge, and curved around to Culp’s Hill. Over the course of the next day, the fighting would be fierce and deadly, with no significant ground gained by the Confederates by night fall.

Lee ordered attacks on both flanks of the Union fishhook. On Culp’s Hill, Ewell attempted to dislodge the Union troops from their positions, but with little effect. The fighting was brutal, hand to hand at times, and wounded from both sides crawled to Spangler’s Spring to get water for themselves and others. 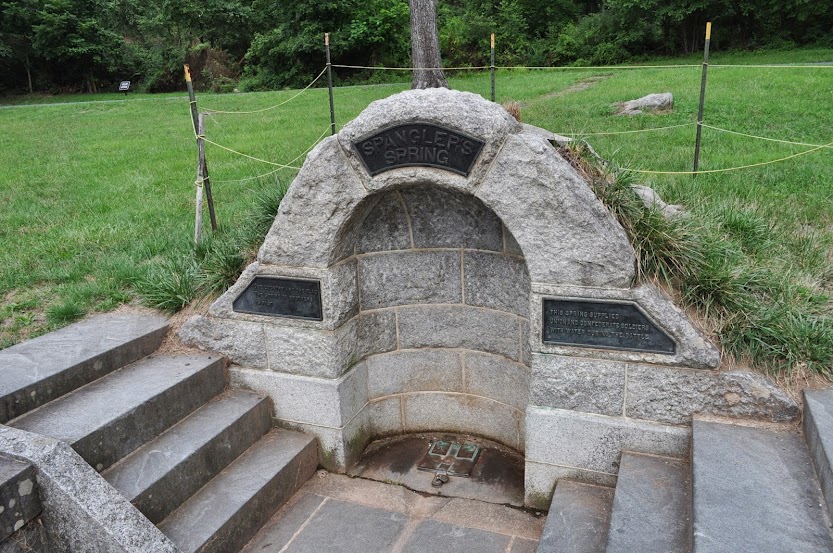 The spring is now filled. The plaque on the left says “One country and one flag. The strife of brothers is over.”

Meanwhile, down on the Union’s left flank, things weren’t going quite so well at first, even though they occupied the high ground. Longstreet’s Corps attacked, with General Hood leading an assault over the rough ground of Devil’s Den and what became known as the Slaughter Pen at the foot of Little Round Top. Fierce fighting continued as McLaws engaged Union troops in the Wheatfield and Peach Orchard throughout the day, when Sickles broke position on the high ground and brought his brigades too far forward. Despite heavy losses, the Confederates pressed their advantage, setting the stage for an assault on Little Round Top. 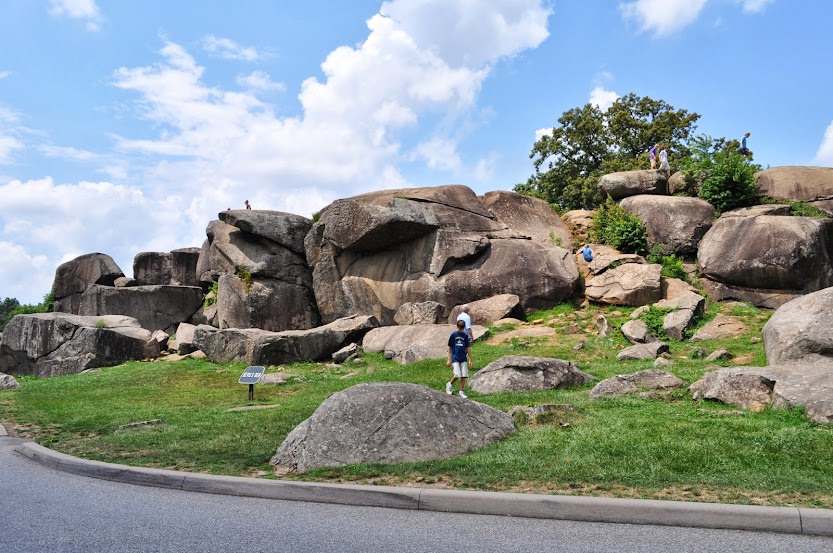 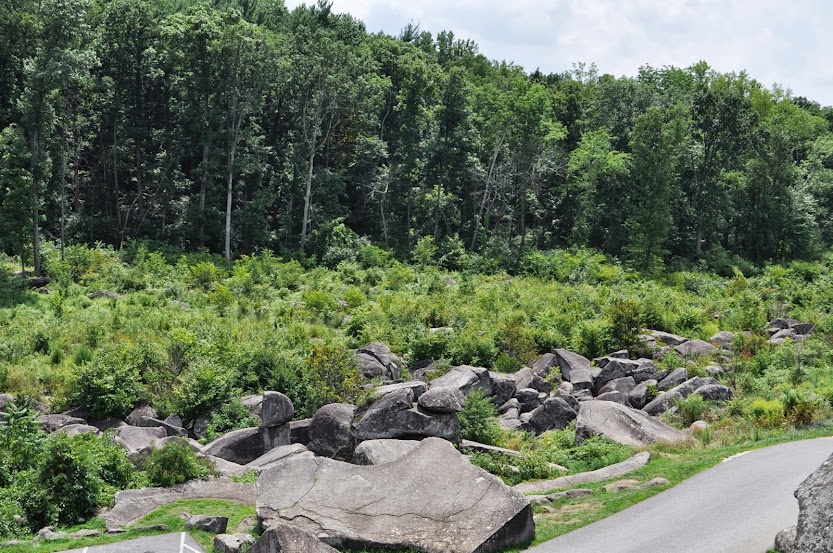 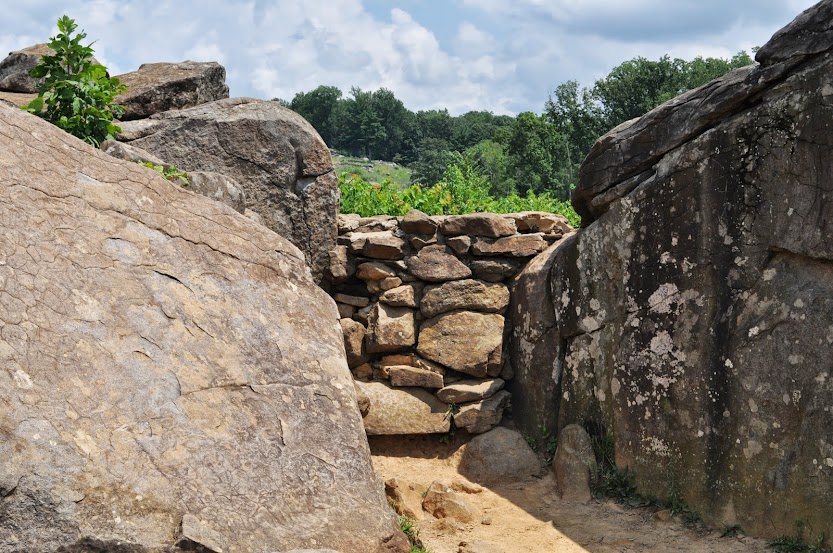 A Confederate sharpshooter’s nest, site of a famous, though staged, photograph by Alexander Gardner.

The original Gardner photograph, “Home of a Rebel Sharpshooter” (Image from Wikipedia Commons)

Here’s where the Union fishhook came into play. Meade had all interior lines of movement, and was able to move 20,000 men from other positions to reinforce the flanks at Culp’s Hil and Little Round Top. That doesn’t mean the fighting wasn’t desperate, and we’re all familiar with the famous bayonet charge performed by the 20th Maine, lead by Colonel Chamberlain. (It’s honestly one of my favorite scenes in Ron Maxwell’s “Gettysburg”.)

The charge of the 20th Maine was only a small part of the battle, and fighting would continue to rage on Culp’s Hill well into the evening. But it’s a great example of tenacity and the sort of courage displayed by many, many officers and enlisted men on both sides of the battle.

That night the Confederate cavalry under J.E.B. Stuart finally showed up, and Lee prepared for one last thrust at the Union army. A thrust he believed would crush the Union center, collapse their lines, and force Meade to retreat. Here’s where a lot of speculation comes in. Had Stuart’s cavalry been on site the entire time, had they reported the movements of Meade’s army prior to the battle, one could argue that the positioning, the planning, and execution of Lee’s maneuvers could have been quite different. Contemporary sources also point out that Lee wasn’t exactly well during the battle; he suffered from a heart ailment that would trouble him until his death in 1870, and it’s been said that the Confederate commander was ill and weak during the first days of the battle and this may have clouded his judgment.

Or maybe Lee thought, as many thought, that his army just could not be defeated. So he ordered Longstreet to engage the divisions under Pickett, the only truly fresh troops they had, Trumble and Pettigrew. The plan was to commence a frontal assault on the Union positions in the center of Cemetery Ridge, where the Union line was believed to be weakest. Lee ordered an artillery bombardment that would silence the Union artillery and further weaken the center. However, the bombardment did little except to deplete the Confederates ammunition, and when the 12,500 men began their march over a 3/4 mile stretch of open ground, they were exposed to Union artillery and, when in range, rifle fire that decimated their ranks. 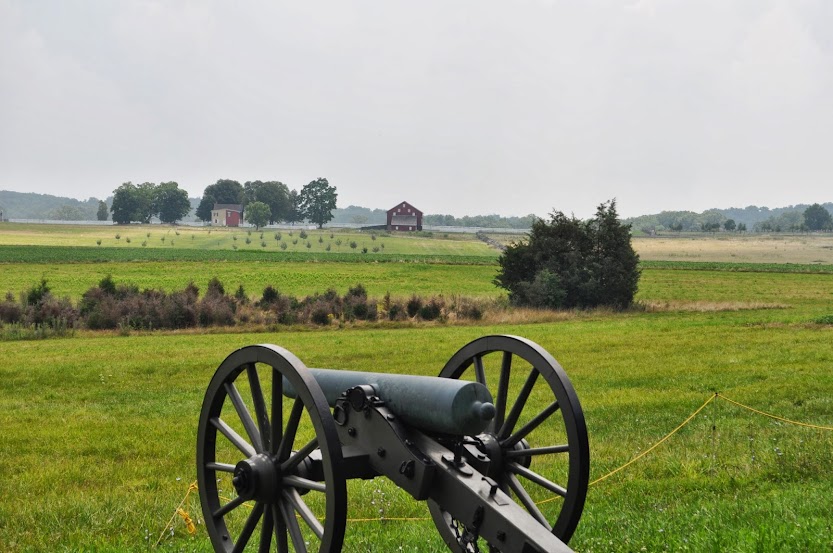 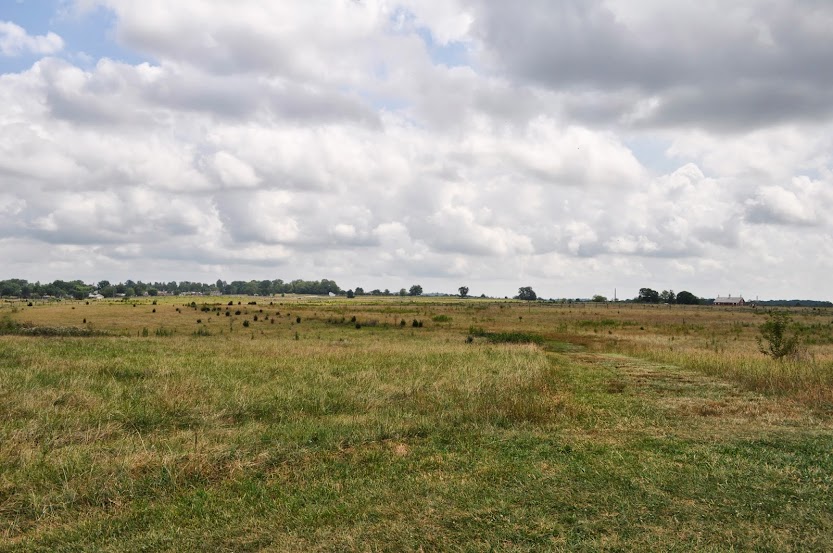 Looking out over the fields toward Cemetery Ridge. The large copse of trees a third from the right of the photograph was the point at which the Confederate charge should have converged. 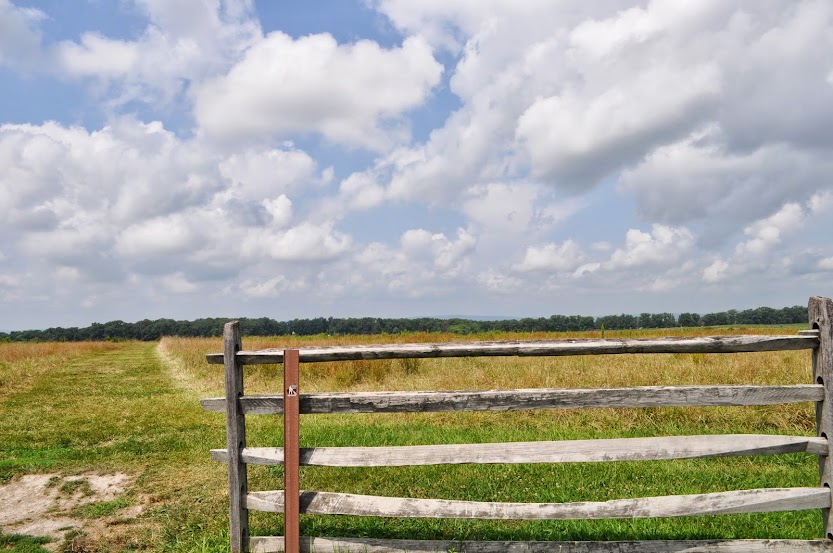 Upon reaching the Emmitsburg Road, Confederate troops had to scale a five-foot high post and beam fence, further exposing them to the rifle and canister fire they were now within range of. Many men didn’t get farther than this fence. 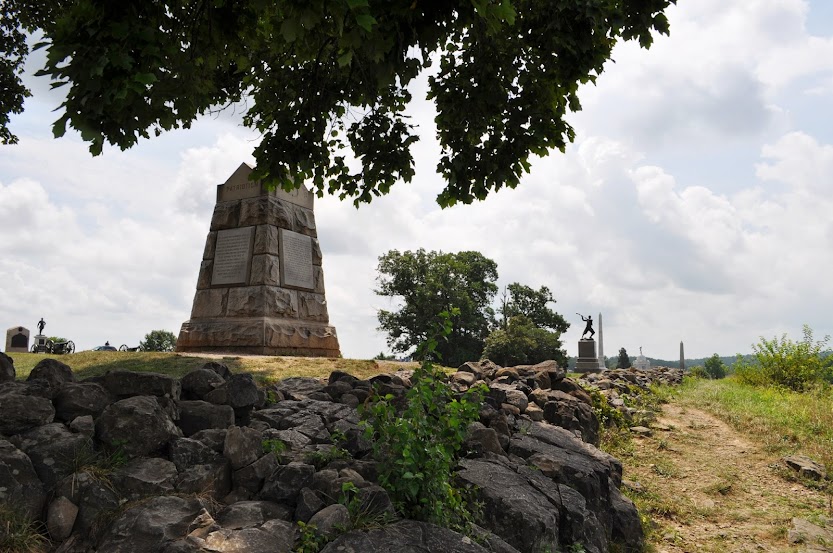 Only Armistead’s Brigade, part of Pickett’s Division, reached the stone wall of the Angle, at the copse of trees, breaching the Union line. Armistead was killed, most men were killed or captured, and the rest of the forces retreated to Seminary Ridge

The men who survived “Pickett’s Charge” limped back to the Confederate positions on Seminary Ridge. The next day, July 4th, Lee began moving his shattered army back toward Virginia, and Vicksburg fell in the West. Meade did not pursue Lee until July 7th, and the two armies engaged in skirmishes and rear guard action for several days following the battle at Gettysburg. But by July 24th, the Army of Northern Virginia was beyond pursuit. Despite criticism from Lincoln and others in Washington, Meade remained in formal command of the Army of the Potomac until the end of the war, though Grant located his headquarters with the Army of the Potomac upon his appointment as Lieutenant General of all Union Armies in 1864.

Back at Gettysburg, civilians were left to deal with the scores of wounded and dead men around their small town. Soldiers were buried, most unidentified, and in November of 1863, the burial ground just south of Gettysburg was dedicated as a national cemetery. On November 19, Abraham Lincoln delivered a short address to recall the sacrifices of the men buried at Gettysburg, and all who had died, redefining the war and stating that “these dead shall not have died in vain—that this nation, under God, shall have a new birth of freedom—and that government of the people, by the people, for the people, shall not perish from the earth.”

The only known photograph of Lincoln giving the Gettysburg Address, November 19, 1863. Lincoln is the bareheaded man to the left-center of the photograph.

You can see more photographs from my trip to Gettysburg here.

More information about the Battle of Gettysburg can be found at: