Way back in the early 2000s, I attempted NaNoWriMo a couple times. I didn’t get far. November is sort of a sucky month for teachers to attempt a 50k word draft.

Then in 2012, I decided to try tacking JulNoWriMo. The result was the first three-quarters of the manuscript that, eventually, became my upcoming chick lit romance, BETTER THAN CHOCOLATE (which should be out this September if all goes as scheduled – more about that in the coming weeks). I gave the July version of this writing challenge another go in 2013, which resulted in the first half of a post-Civil War historical romance that, hopefully, will see the light of day now that I’ve pulled it out of First Draft Limbo.

Anyhoo, a few years ago the folks who run NaNoWriMo started holding these Camp NaNoWriMo events in April and July. Given that I have 3 more books planned to follow BETTER THAN CHOCOLATE, I thought it might be a good idea to try drafting the next installment this July.

It’ll be messy, but it’ll be a starting point.

So tomorrow I’m off to Camp!

You may recall that at the end of my post about the War of 1812/Jane Austen Weekend at the Genesee Country Village Museum, I said that I was rather tempted to get into historical sewing. Or something to that effect. 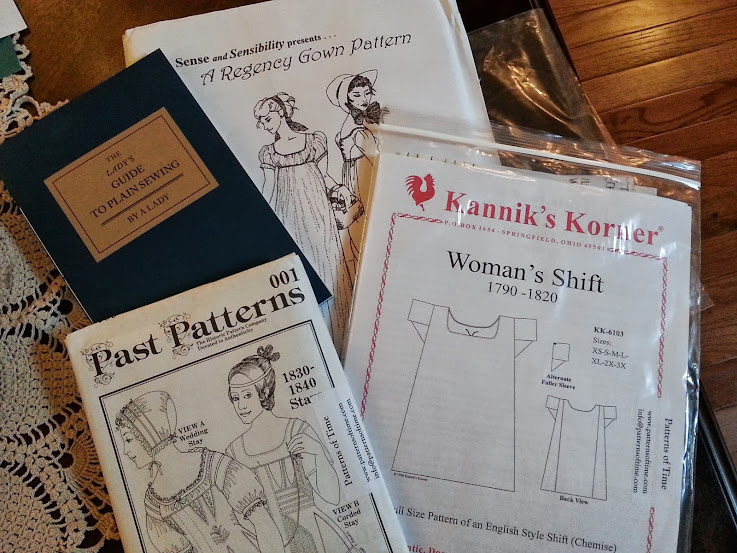 I know what some of you are thinking. Aren’t you supposed to be writing? The answer is, yes, and I am writing. I’m about a third of the way through my historical romance (hush hush on the details of that for now!). Unfortunately, it’s slow going at present; I’m hoping to have some major breakthroughs over the next week in which I hammer out 5k+ words a day in order to reach my deadline. I’m not into the work count deficit too deeply – yet. And so far I’ve been able to keep my inner editor locked in a box and away from my first draft.

So, I admit it – the last thing I need is to take on another project of any kind. Between my JulNoWriMo goals, managing general stuff around the house, prepping for a move to a new grade level, and ten thousand other things I should be doing… Yeah, getting into historical sewing seems an odd choice.

The final bit of motivation comes from the fact that I’m starting to volunteer at Fort Ontario, which, at various points, holds events for the French & Indian War, the American Revolution, the War of 1812, the Civil War, and the standard, day to day depiction of the Fort as it was in 1868 (specifically). It would be awesome to have outfits for each era to wear for special events (or to be the most awesome, interactive tour guide ever.)

Of course, the trick is that I have to teach myself how to sew first. Hence the handy little blue book, The Lady’s Guide to Plain Sewing I from Kannik’s Korner, which has lots of nicely illustrated explanations for how to do proper basic hand stitches and so on. I bought a fabric quarter at Joann Fabrics, which I plan to use with light colored thread to practice (so I can see what I’m doing).

Beyond that, once I have the basic stitching down, I plan to make a couple Regency/Federal era items: a shift, corded stays, and a gown. I figure Regency is a good time period to begin with, since it’s a lot of straight lines and, compared to other fashion eras, doesn’t call for tons of fancy embellishment. And, since it’s a fashion era that predates machine sewing, the fact that I neither own nor have ready access to a sewing machine (not that I remember my 7th grade home-ec lessons on how to use one) is sort of a bonus. Since you all know how I am about historical accuracy and all…

The shift (I’ll be using Kannik’s Korner Woman’s Shift 1790-1820) is going to be my first project. Best to start from the inside out, right? Plus, it’s basically a lot of rectangles and is really simple.

From there I’ll move on to a set of corded stays, using Past Patterns #001. I realize that these particular corded stays are dated a bit outside the Regency era, but I’ve found several sources (and historic fashion bloggers) that site these as period appropriate. I expect this to be the most complicated of the three projects I’m undertaking, just because of the amount of cording. And I’ll either have to find appropriately sized busk and back stays to purchase, or use the included directions to make them myself (or beg the hubs to make them for me, pretty please with sugar on top).

Last, I’ll make a gown using this basic Sense & Sensibility 1804-1812 pattern. I haven’t done any real planning on this at all, other than the idea of using detachable sleeves to make the gown more versatile. We’ll see what happens.

So that’s it in a nutshell! The historical sewing ship is ready to sail – anchors away!

The past couple weeks have been absolutely crazy around here. For the record, I have nine (count ’em, NINE) days of school left before summer vacation. Between last minute grading, CNYRW meetings, Book In A Week challenges, and two training workshops geared toward the new CCSS math modules put out by New York State, I feel like I haven’t had time to breathe.

Fortunately, the hubs and I officially booked our summer road trip lodging last night, and I’m looking forward to getting out of Dodge again for some quality time.

I’ve been focusing a lot on revisions to the HFMO Part 1 the past few weeks. My May BIAW goal was to revise and edit about 36 scenes for POV consistency, and look at some “scene and sequel” things. It went exceedingly well.  I only had a few scenes that needed a total overhaul, most just needed a bit of tweaking. Of course, I then decided it was time for a serious sit-down from page 1 to page however-many-pages-the-sucker-is-long to do line editing. Somehow, I managed to cut about 2000 words in the process (and I still have 4 chapters to go!)

Then I thought I should really take a careful look at my query and synopsis, and I did a bit of tweaking there. I think I’m getting better with the synopsis, and I’m close with my query blurb. I suppose someday I’ll be confident in that particular skill. Because it’s hard and I hate it with the fire of a thousand suns.

And then I hemmed and hawed for about a week over entering the HFMO Part 1 in the Unpublished Maggie Awards, held by the Georgia Romance Writers. This year, they added a “novel with romantic elements” category, which nicely fits the HFMO because it’s not a “true” romance, even though it has a couple love stories. I contemplated, I worried over the synopsis, I nit-picked my first few chapters to make sure they were as clean as possible. And then I took the plunge. Away my entry went this afternoon!

Now I just have to wait until August 15th to find out the results.

See, there’s this contest going on today, co-hosted by YA author Ruth Lauren Steven, in which thirty exceedingly lucky people will get their queries and the first 500 words of their manuscripts placed before ten different literary agents.

I hemmed and hawed about entering this. Query writing, let me just say, may be harder than writing the actual book for which you are writing said query.  How do you turn 100+k words into a two-paragraph pitch?  And 500 words isn’t a lot.  It worked out to be about two pages, 12 point New Times Roman font, double spaced.  For certain genres, that’s plenty of room for a punchy opening.  Historical fiction (whether general HF or historical romance, which I’ve decided my MS technically falls into) usually needs a little more page space to ramp up.

I’ve rewritten my opening, oh, seven times now.  I think it’s way better than it was, but it definitely has a long way to go.  At least I think so. Somebody else might think otherwise. Still, had I been given the leeway of the first 800 words, for example, it would have been better.

Long short story short, I entered this contest. Mere minutes ago, I plopped my awful query and only slightly less awful opening 500 words into an email and fired it off.  And now I can only sit back, work on other projects, and try to avoid heart palpitations as I wait.